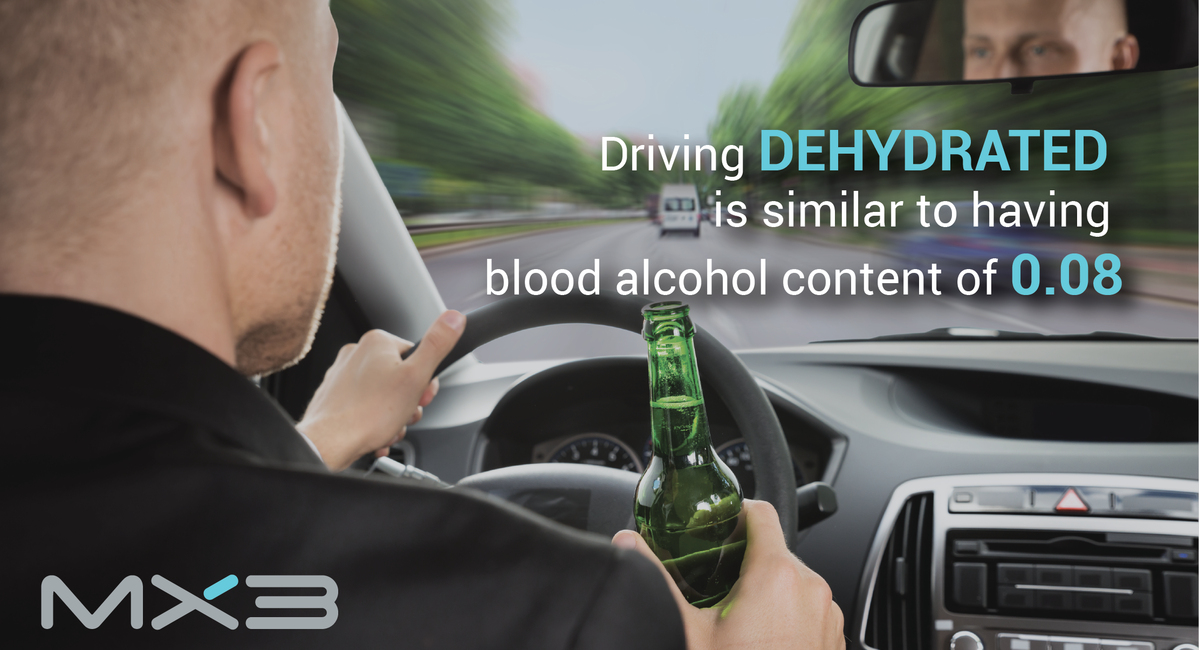 We’ve previously described how even mild dehydration increases confusion and fatigue, inhibiting decision making and increasing the difficulty of complex mental tasks. In this article we’ll look at several studies which examine the effect of dehydration on vigilance and errors, highlighting the importance of staying hydrated to reduce the chances of accidents and improve safety.

Researchers at Loughborough University investigated the impact of reduced fluid intake on driving errors in prolonged driving simulation tasks. They observed that mild dehydration significantly increased the number of minor driving errors when compared to a well hydrated state. In the dehydrated state more than double the number of incidents, such as touching a simulated rumble strip,were observed across the 120-minute task. The increased error rate was equivalent to the increased error rate seen in individuals with a blood alcohol content of 0.08%, above the legal limit in many countries. The results of this study suggest that many preventable road accidents may be avoided through improved hydration practices among drivers.

Up to 90% of general aviation accidents can be attributed to human error. In a study of pilots enrolled in a collegiate aviation program dehydration was shown to significantly increase the number of flight performance errors during a 20 minute flight simulation. The same pilots also demonstrated a reduced situational awareness –being less able to correctly perform tasks involving the mental rotation of objects. Combined, these results suggest that cognitive function and performance is inhibited in dehydrated pilots. As peak performance and vigilance is necessary for flight operation and safety, an increase focus on hydration may increase vigilance, reduce pilot errors, and help to prevent aviation accidents.

Study #3: Dehydration is significantly associated with falls in older adults

Unintentional falls impact half of adults over the age of 80 each year and are a leading cause of hospitalization and fatalities in adults over 65. A cohort of over 30,000 patients was investigated to better understand the factors that influence the risk of falls in this vulnerable population. Dehydration was common, with 38% of patients appearing dehydrated by at least one hydration measure. Of these patients over a third experienced a fall, significantly more than in hydrated individuals. The use of diuretics –known to increase the risk of dehydration –were also shown to increase the risk of falls in this population. These results highlight that elderly populations are at particular risk of dehydration and hence the importance of ensuring they remain hydrated and identifying those which require additional support in ingesting and retaining fluids.

Dehydration can increase the risk of avoidable errors and injuries in many contexts. Appropriate fluid intake can help individuals remain vigilant, function at their best and improve their safety and the safety of others.